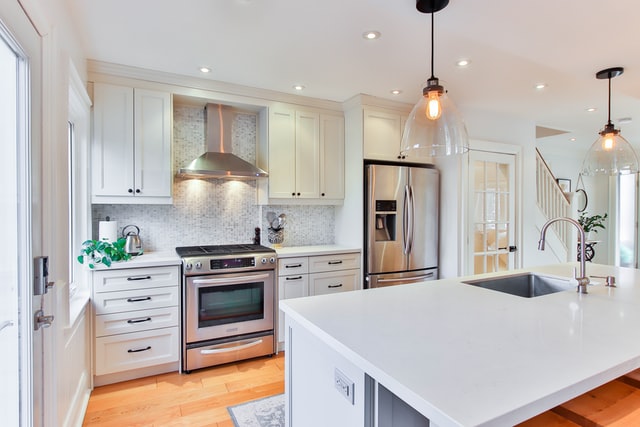 Most modern vent hoods include some kind of built-in lighting system. The system has several lights that illuminate above the stovetop. They’re quite handy when it comes to cooking because they allow you to see whether an oven has been turned off properly.

Depending on the type of bulb, its life span may vary from several months to years.

First, let’s take a look at why the problem happens in the first place. Then, we’ll go through some solutions for fixing it.

Why do range hood lights fail?

Apart from normal usage, there are certain situations where the lights could get damaged due to exposure to excessive heat. One such factor is moisture from the cooking and the burning gas. This moisture may cause the bulbs to fail prematurely.

Another factor is the life span of light bulbs in terms of their usage.

If the hood gets too hot, then there is a chance the wiring inside may cause a circuit breaker, or the bulb’s filament can snap which can shut down the entire lighting system.

Either of those causes your light bulbs then you may need to troubleshoot to identify the main reason for failure, but that’s a topic we will leave for another day.

Today, we assume that the wiring is working perfectly just want to change the bulb.

Which light bulbs should you choose for your range hood?

Choosing the correct lightbulb ensures that there won’t be any differences between them in terms of their specs. There are several types of lightbulbs available for use; however, the two most commonly used ones are halogen and LED. Today’s modern LED bulbs offer greater performance than traditional halogen lightbulbs.

Halogens are not always the best choice for lighting because they consume too much electricity. However, LEDs use less power than a traditional incandescent bulb. They’re also instant start, which means they don’t need any sort of warm-up time like compact fluorescent lights (CFLs).

Halogen lamps use some of their energy to produce light but most of their energy goes towards producing heat. After several hours ON, the lightbulb would be warm to the touch because its filament was glowing red from the heat on the other hand LED remains cool while using. So don’t worry if you accidentally touch a hot light bulb it won`t any harm

Make sure you get the right size bulb for your lampshade. When buying an LED lightbulb, check whether there’s enough room for the bulb to fit into the holder. If not, don’t buy them!

Once you’ve got the right bulbs, replace any bad ones with new ones. Below we show you how to do it accurately.

Removing the old light bulb from the range hood:

Replacing an old lightbulb allows space for a new one. Follow these seven easy steps.

Put on safety gloves before starting any DIY project. If the hood hasn’t had enough time to cool down, or the lightbulb has just burned out, replacing them immediately is important.

If you don’t have any gloves, wait until the system has cooled down before forming a loop using masking tape. Make sure the sticky side of the tape faces outward. To remove the bulb from the socket, grasp the base of the lampshade. If you’re looking for something inexpensive but effective, consider buying just one good-quality LED bulb instead of several cheap ones.

Grasp the tape and pull it up gently on the bulb. Feel some pressure pushing down on the bulb. Turn the light bulb clockwise by 1/4th rotation. If you’re having trouble removing the bulbs from their contacts, then you’ll need to use some pliers. You need to be careful when using too much pressure because it could damage the bulb in your hand.

After removing the bulb from its socket, pull it out gently but firmly so that it doesn’t break off inside the lampshade. Then dispose the broken bulb properly.

Some hoods have a plastic cover over their lightbulbs. If you want to replace an incandescent lightbulb, you’ll first need to unscrew the fixtures from which they’re hanging before removing them completely.

Most ventilation hoods include starter kits. To remove the lightbulb from its socket, simply twist the base clockwise until it pops out. Replace it with a compatible one if necessary.

How to install new light bulbs in your range hood

Before doing anything else, check whether electricity is flowing into the terminals. Here’s how you do it:

Can I use an LED light bulb for my range hood?

How do I remove a range hood light?

Most range hoods can be twisted off or pulled out of your hood. Also, some lights can be pushed to detach them.

Can I use both Halogen and LED lights in my vent hood?

Range hoods have two types of lighting systems – halogen and LED. Both are used in different ways. Halogens are used to light up areas in the kitchen, but they also heat up the air. LED bulbs do not produce any heat, but they still have to be put into a specific place.

There are different kinds of drivers, and you must match them to the type of bulb they’re going to work with. An LED driver converts AC into DC. A replacement driver is as easy as unplugging an old driver and plugging in a new one. Most outlets are 120V. LEDs need less than 5V to work properly. This means you’ll need a 12V or 24V power supply.

Which lightbulb goes in a range hood?

Most range hoods use either LEDs or halogens. Incandescents are less common than other types.

Can I use a regular light bulb for my range hood?

What is the electricity cost per month for my range hood bulb?

Energy costs vary, but LED lights cost anywhere from 5 to 20 cents per kilowatt-hour. After one year of use, LEDs cost about the same as incandescent lights. Cost varies depending on how much electricity you use. You might pay up to $1 per year or less than 10 cents per year.

What if I use a light bulb in my range hood that has greater wattage?

Using a light bulb that is higher than the recommended wattage could cause your range hood to overheat.

Difference between a regular bulb and an appliance bulb?

Regular bulbs last longer than appliance bulbs because they are made of less sturdy materials.

How to remove covered fixtures of the range hood?

You must remove the cover before you turn the light on. Don’t use excessive force when twisting the bulb off.

How to remove the starter of the range hood?

Many models have starters. You should be able to remove them easily by turning them counter clockwise while looking into them. Now you need to put in the correct starter.

How can I replace a Halogen light with an LED light?

How do I fix my range hood light?

The easiest way to fix a broken range hood light is to replace it. If you’ve already replaced the bulb, then you may need to replace the entire unit. It depends on which part broke.

How long does a range hood light bulb last?

What size is E26 light bulb?

E26 is a standard size for lighting applications.

How do you remove the bulb from a cooker hood?

It shouldn’t take too long to change a stove hood lightbulb. If there aren’t any additional parts to put together, then it shouldn’t take longer than one minute. Doing things right is what makes the difference between success and failure. Following our step-by-step guide on how to replace range hood light bulb and precautions will give you the best experience.